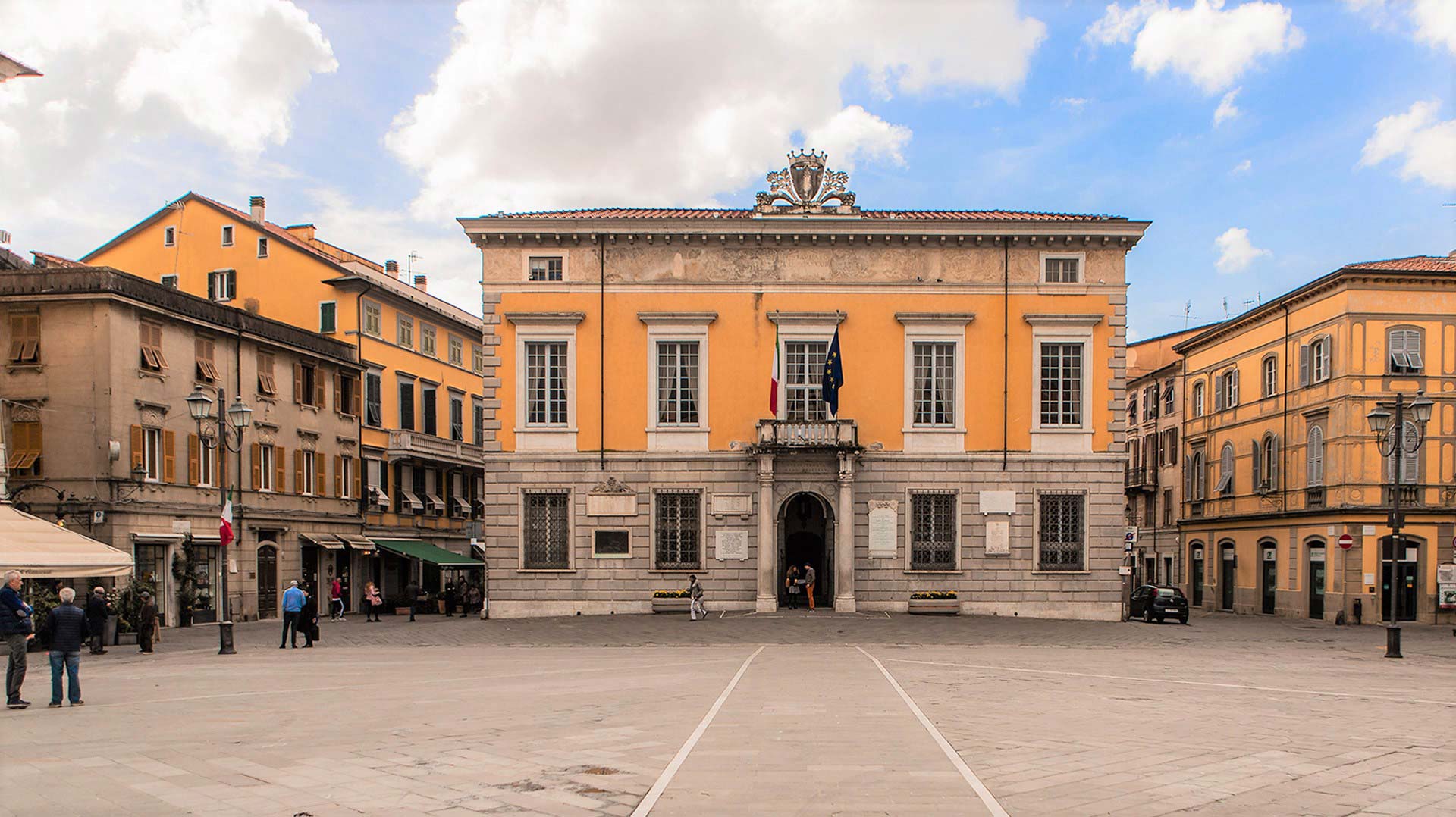 Between the river and the sea:

The “Magra’s Valley” is a borderland located among Liguria, Emilia Romagna and Tuscany. This unique territory belongs to the “Lunigiana” area and is the result of a cultural crossroads: protected by the majestic “Apuan Alps” and held by sweet hills which in turn frame a fertile valley crossed by the river Magra and lapped by the Ligurian sea. From the naturalistic point of view this is a very important area, thanks to its truly unique damp sites too, that includes different environments: from the fluvial to the coastal landscape and from the plains to the hills. This territory’offer, which is rich in traditions, is completed by its archaeological, historic-artistic and eno-gastronomic heritage. As far as the urban planning and architecture of the places in the “Val di Magra” are concerned, elements of the past and the Middle Ages, of the Renaissance and Baroque periods can be found to this date. Due to all the aforementioned aspects this territory can offer a unique travel experience to all visitors who are searching authenticity, integrity and complexity.

The most characteristic places and hamlets in the “Magra’s Valley”, where the “Locanda dell’Angelo” Hotel stands:

• Sarzana is an ancient medieval hamlet dating back to the Sixteenth century that to this date preserves its walls with the five Towers and the suggestive Roman and Parma Gates. The Firmafede Fortress or Cittadella, of Pisan origin, and the imposing Sarzanello Fortress, an ancient residence of bishops, are of considerable historical importance. The picturesque historic-pedestrian center stretches between Porta Romana and Porta Romana along the characteristic “Via Mazzini”, right on the “Francigena Route” of the old days, and “Via Bertoloni”. The Saint Andrea’s Parish Church, the Santa Maria Cathedral and the historic buildings overlook just “Via Mazzini”. Not to miss the “Impavidi Theatre” in “Garibaldi Square”, the “Diocesan Museum” in Firmafede Square and the “Roderio Palace” in “Giacomo Matteotti Square”. In this hamlet many venues alternate: the “Mind Festival”, “Atri Fioriti” and “Sconfinando” just to mention a few of them.

• Luni Luni is an ancient centre of Roman origin close to the border with Tuscany, the Apuan Alps in the background. Being the last town of the Roman Empire, its territory used to link, geographically and historically, the low valley of the river Magra to the north-western area of Tuscany. Luna was just the name of this important pre-roman harbor that later on becomes a thriving commercial harbor: “Lunigiana” derives from the name “Luna”, an area that brings together all these ancient territories. Today Luni hosts the locality of “Luni Scavi” or “Luni Antica” with the remains of the ancient colony of Luni and the National Archaeological Museum with its beautiful Roman Amphitheatre, outside the ancient walls.

• Bocca di Magra is an elegant and hospitable locality close at hand to the Caprione promontory. With a special charm, during the 20th century it was much loved by writers and poets who chose it as their soul refuge, thanks to the intriguing beauty of the landscape: the Apuan Alps mountain chain, the sweet hills decending into a vast valley to lick the banks of the river “Magra”, its mouth and the sea. In Bocca di Magra the Romans built a wonderful villa, overlooking the ancient “porto Lunae”, for the poet Persius who recites in his “Satire”: “The Ligurian beach and the sea and the great Gulf with enormous rocks”, surely the private residence of some important Roman families. The “Roman Villa” is home to meetings and diverse cultural events. Besides, the Hotel at the “Monastery Santa Croce” is definitely worth a visit: from the historical point of view, it is said that Dante stayed in this monastery! Furthermore this venue boasts an enviable view over the mouth of the river Magra and the peace that pervades the old building which was built in 1176 is simply astounding. From Ameglia, at the end of the promenade along the river which can be run either on foot or by bike, you will meet a beautiful well-equipped beach and a free one for all sea lovers.

• Fiumaretta is a seaside resort par excellence, thanks to its vast sandy ocher coasts that attract tourists from every part of the world. It’s located near the mouth of the river Magra and enjoys a beautiful view over the Caprione promontory: the beautiful well-equipped beaches offer water sports among which sailing, diving, surfing and rowing too. Marinella of Sarzana starts right after these Fiumaretta beaches. With a view over Tuscany, Marinella has well-kept beaches, destination of jogging lovers all around the world. In summer these places come alive with colors, fun activities and cultural events for all.

• The Caprione Promontory consists in a series of hills which separate the sea of the Gulf of La Spezia from the Magra flood plain starting from the beautiful “Punta Bianca”, located between Montemarcello and Bocca di Magra. The western side of this promontory is different to the eastern one because it’s more impervious, with rocky and jagged coasts and beaches that can only be reached by sea or very steep paths: one example is the fantastic “Punta Corvo”, a mixture of pebbles and sand with a vegetation dominated by the typical Mediterranean scrub and holm trees.

• Ameglia stands inside the Natural Regional Park of Montemarcello-Magra-Vara. This medieval village has very old origins, as witnessed by the discovery of a necropolis of the “Apuan Ligurians”: jewelry, armor and ceramics found there are today kept inside the Archaeological Museum of Saint George’s Castle in La Spezia. Among the places to visit in Ameglia: the Chuch of the Saints Vincenzo and Anastasio and the Oratory of “Nostra Signora Assunta” dating back to XVIII century and hosting a gorgeously made wooden choir. The Castle of Ameglia in the “Sforza Square”, inside the historic centre, a defensive bulkwark of the village and roads leading to the Lunigiana area. It was completed in 1174 and became an important possession of the bishops of Luni. Today it hosts photography exhibitions, theatre performances, the event “Cinema at the Castle” and the “Olistic Festival” too.

• Castelnuovo Magra is an ancient hamlet present both in the lower Lunigiana area and in the Magra’s Valley known mainly for its D.O.C. wines. Located on the top of a hill, this village dominates all the surrounding territory: from here the eye wonders from the Tyrrhenean Sea to the Vara’s Valley. Must-see places: the “Parish church of Santa Maria Maddalena” in the historic center: the painting by the “Crucifixion” by the Flemish painter “Pieter Brueghel il Giovane” is displayed in the left chapel at the head of the nave. The castle-palace “Vescovile” of Luni is a defensive and residential building located in the historic centre of Castelnuovo Magra in the “Querciola Square”. In August the renowned historical parade for the re-enactment of Dante’s Peace struts its stuff along the village streets: in 1306 Dante stayed in the Castle itself mediating between the “Malaspina” family and the bishop of Luni.