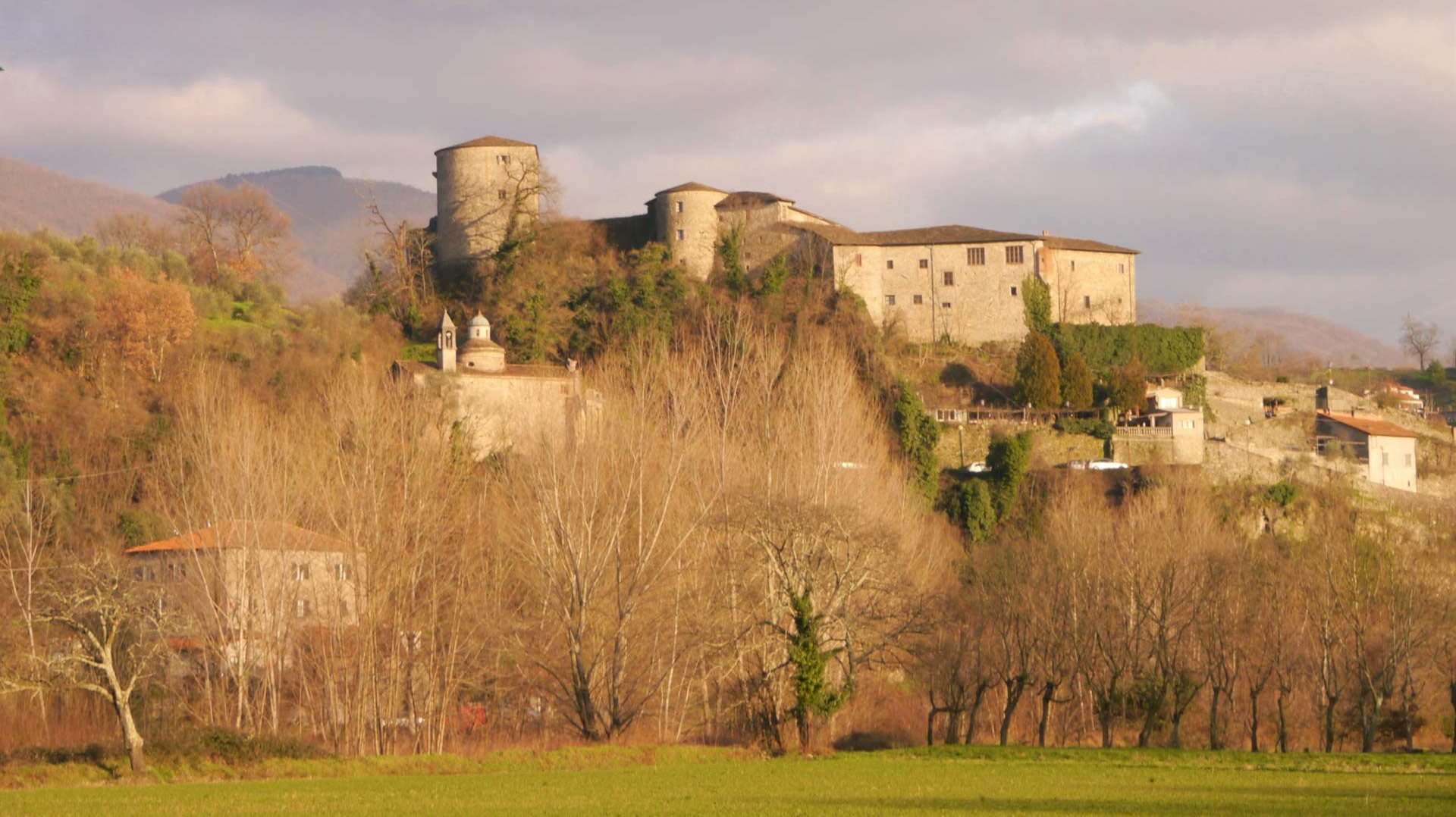 «From Pontremoli Mompensieri entered the town of Lunigiana, of which a part obeyed the Florentines, some castles were of the Genoese, the rest of the Marquis Malespini; who, under the protection of whom of the duke of Milan, who of the Florentines, who of the Genoese, their small states maintained» From the “History of Italy” by Francesco Guicciardini
The Lunigiana land is divided between the regions of Tuscany, Liguria and Emilia and derives from the name of the ancient town of Luni. It also includes the villages of Zeri, Pontremoli, Calice al Cornoviglio, Filetto di Villafranca, Fivizzano, Equi Terme, Fosdinovo, Sarzana, Castelnuovo Magra, Luni and Ameglia. The Lunigiana is characterized by the “Stele Statues”, the most ancient stone monuments or menhir statues that have ever been found in Italy: the most widespread area includes the middle basin of the Magra river and eastern Lunigiana. These suggestive statues can be admired at the “San Giorgio Castle” in La Spezia as well as in the Museum of the “Piagnaro Castle” located in Pontremoli which collects them. During the second world war the Lunigiana area was marked by the Gothic Line. Its numerous castles, some of which are in a good state and can be visited, are a must for all those visitors who love history and local culture. In particular, it’s worth mentioning the Malaspina Castle in Fosdinovo thanks to the presence of Dante who mediated in the “Castelnuovo Peace” in 1306. The “Verrucola and Gragnola Castles, among the castles of Fivizzano, the Brunella Fortress in Aulla, the Malaspina Castle in Filattiera and the Malgrate Castle are worth visiting too.

The most characteristic hamlets of the Lunigiana area are:

• Zeri, located in the region of Tuscany between the Magra valley and the Vara one, is a little rural village mainly renowned for the beautiful sky resort of Zum Zeri hosting its sky-school camp and refuge at the “Passo dei due Santi” and the breeding of lambs. The cuisine of the area includes typical chestnut, “polenta” and wild boar based dishes. In ancient times it was crossed by the “Via Reggia” or “Salaria”. During the Resistance Zeri distinguished itself for heroic deeds and gained the bronze medal for military valor.

• Pontremoli is a village rich in history, located in Tuscany, inside an area called “high Lunigiana”. From this village you can start your journey on the discovery of the adventurous canyons of “Stretti of Giaredo”, or walk along a stretch of the ancient pilgrimage route that leads you from Canterbury to Rome, the so called “Via Francigena”. During the summer Pontremoli hosts the “Premio Bancarella” and the historical reenactment “Medievalis” celebrating the visit of Federico II. The “Concattedrale of Saint Mary of the People” with its fine paintings and sculptures, the dome of the same church, the Piagnaro Castle and the “Campanone” or Cacciaguerra Tower, the old’s village symbol, are certainly worth a visit.

• Villafranca, once a part of the Malaspina imperial fiefs, is located in the heart of the Lunigiana territory. The hamlet of Filetto di Villafranca, of Byzantine origin, is renowned for its summer parties: the “Medieval Market”, with theatre performances and falconry, the “Fair of Saint Genesio”, the antique markets and the conferences on contemporary art in the historic Cavalli Palace – House – Gallery in “Piazza dell’Immacolata”. On the background the fantastic mountain range parade of the “Tosco-emiliano” Apennines and, close to the boundary walls, the beautiful meadow with chestnut trees is a picnic destination, especially on Easter Monday.

• Fivizzano was nicknamed “A pearl lost in the mountains” by the poet “Giosuè Carducci”. In 1571 a challenge among the archers of the different districts took place in the “Medici Square”: every year from 1971 the historical manifestation “The Challenge between Earth and Court Archers” is renewed. A folk costume parade with wavers, musicians and knights. The “Historical Group of Fivizzano” is born by this historical re-enactment. Always in summer, the Market Show of Typical products “Sapori” is held in the old “Agostiniani” hostel and throughout the entire historic centre too. Not to miss the church of the Saints Jacopo and Antony in the “Medici Square” with the Medici fountain in the middle, commissioned by Cosimo III of the Medici, and the Museum with the invention of one of the first writing machines in the world. Jacopo from Fivizzano was the first one to print books with the first mobile Italian typefaces.

• Equi Terme is an ancient village located underneath the suggestive “Pizzo d’Uccello” summit boasting the renowned rocky Canyon nicknamed “Furrow of Equi”. In Equi an ancient tunnel crossed by the marble road leading to the caves still exists. The village is characterized by the presence of numerous sulphurous thermal water springs, caves and streams. Not to miss the thermal centre Hotel Terme and the “San Francesco” Church with its bell tower in the ancient part of the village; the Sanctuary of the Madonna in the wood with its legend, the cultural Park of the Equi Caves and the Museum of the Equi Caves with its replica of the huge cave bear and of the Neanderthal man. Finally the tradition of the Equi Terme live Nativity is renewed every year during the Christmas period: the steam train with which to reach the event and guided tours to the mythical caves animate this tradition too.

• Fosdinovo, whose name derives from “Fosso”, i.e. the ancient hamlet’s square, is a medieval village which rises on a hilly-mountainous territory. It represents the “door” to the Lunigiana, in fact a stele statue from the Bronze Age was found in the countryside around. D’Annunzio quotes the Castle of Fosdinovo in his anthology of Chosen Prose. This Castle is the biggest and best preserved of the all Lunigiana area: the fresco paintings in the middle of a large hall witness the strong friendship between Dante and the Malaspina family, also recalled by Giovanni Boccaccio. In Fosdinovo too, once on the Gothic Line, the Liberation Day against Nazi-Fascism is greatly celebrated. This village is festively decorated during the Medieval Festival and comes alive with the performances in local dialect by the “Teatrino Girò”. Finally, the Adventure Park offers acrobatic routes on trees, bungee trampoline, archery and lots more.

• Calice al Cornoviglio belongs to the Regional Natural Park of Montemarcello-Magra-Vara and is located inside a small valley in the Vara's valley, on the border with the nearby Lunigiana, about 600 m. high, among the surrounding hills. A picturesque medieval hamlet, Calice boasts the Doria-Malaspina castle that also hosts the picture-gallery “Davide Beghè”, the Parish Church of Nostra Signora di Loreto with Seventeenth century’s paintings, “Saint Mary’s” Parish Church” with interiors decorated by the painter Zeffiro Righi and “fresco” paintings by Davide Beghè and the Oratory of “St. John the Baptist” with the painting of the “Madonna with Child and the Saints John and Peter”. From Calice horse excursions or on foot itineraries depart: among pastures and woods, through the “High Route of the Ligurian Mountains”.