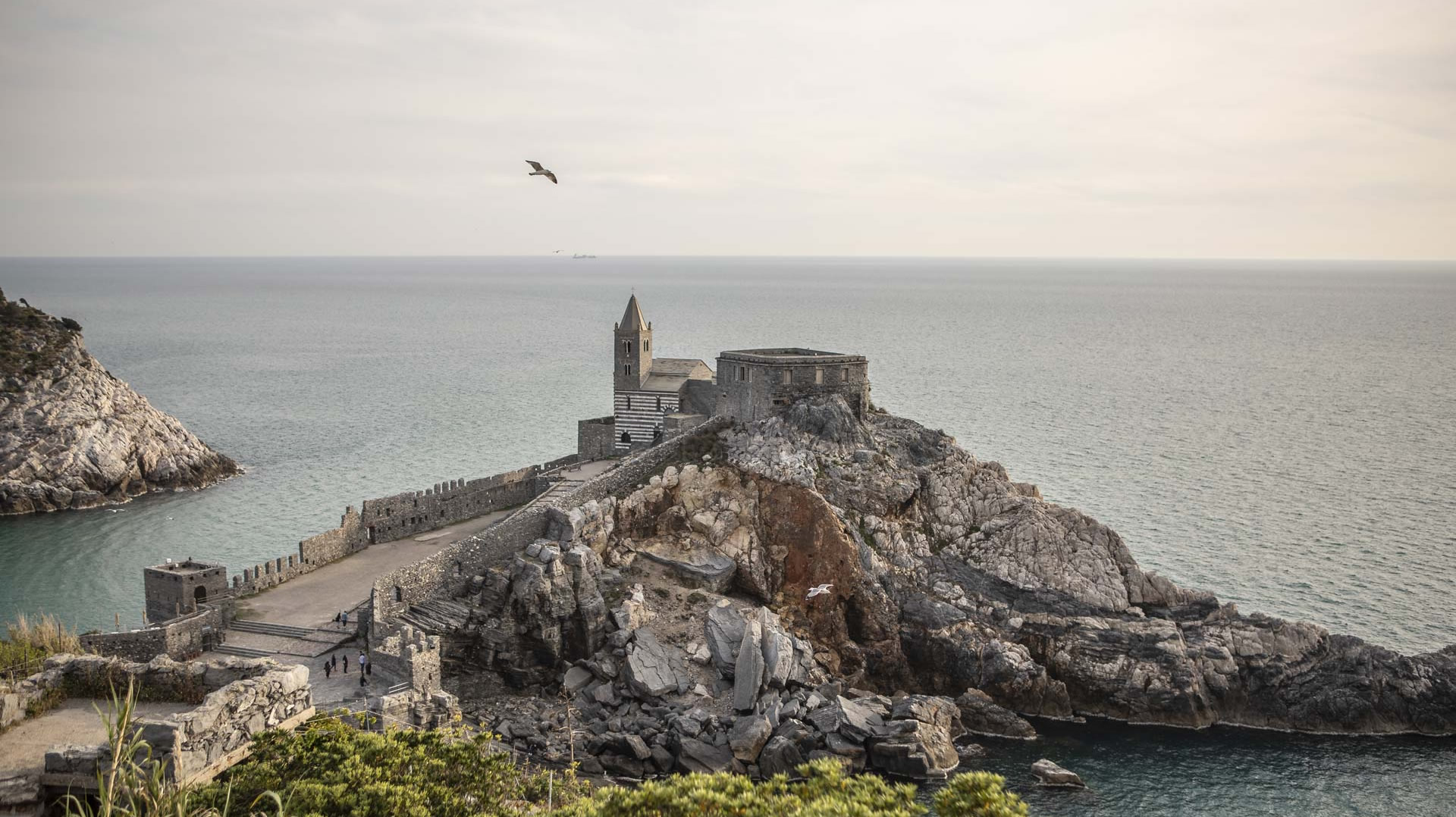 Portovenere is a beautiful medieval hamlet located in the westernmost part of the Gulf of the Poets. It’s a promontory overlooking the wonderful Palmaria, Tino and Tinetto Islands. The compact array of picturesque pastel coloured tower-houses embraces the marina which stretches up to the “Bocche” area. From here, upon going up the wide stairs, you’ll reach the wonderful “Spallanzani Square” that takes you straight to the “Byron Cave” and the suggestive Saint Peter’s Church with its magnificent terrace. In 1822 the great poet G. Byron stayed in this heaven on earth for a long time: right at the entrance of the “Byron’s Cave” there is an inscription commemorating the poet’s passage. Another great poet, Eugenio Montale, dedicated immortal verses to Portovenere, which are engraved in the rock in gratitude end eternal memory to this date: “There is a newt from the waves that laps the threshold of a Christian temple…”. It’s advisable to walk along the narrow inner alleys or “carugi” that lead to the Doria’s Castle and Saint Lawrence Church, true musts, and stroll along the sea promenade that offers wordly unique scenarios. Finally, don’t miss the boat tours to the Palmaria, Tino and Tinetto Islands departing from the Portovenere Marina. 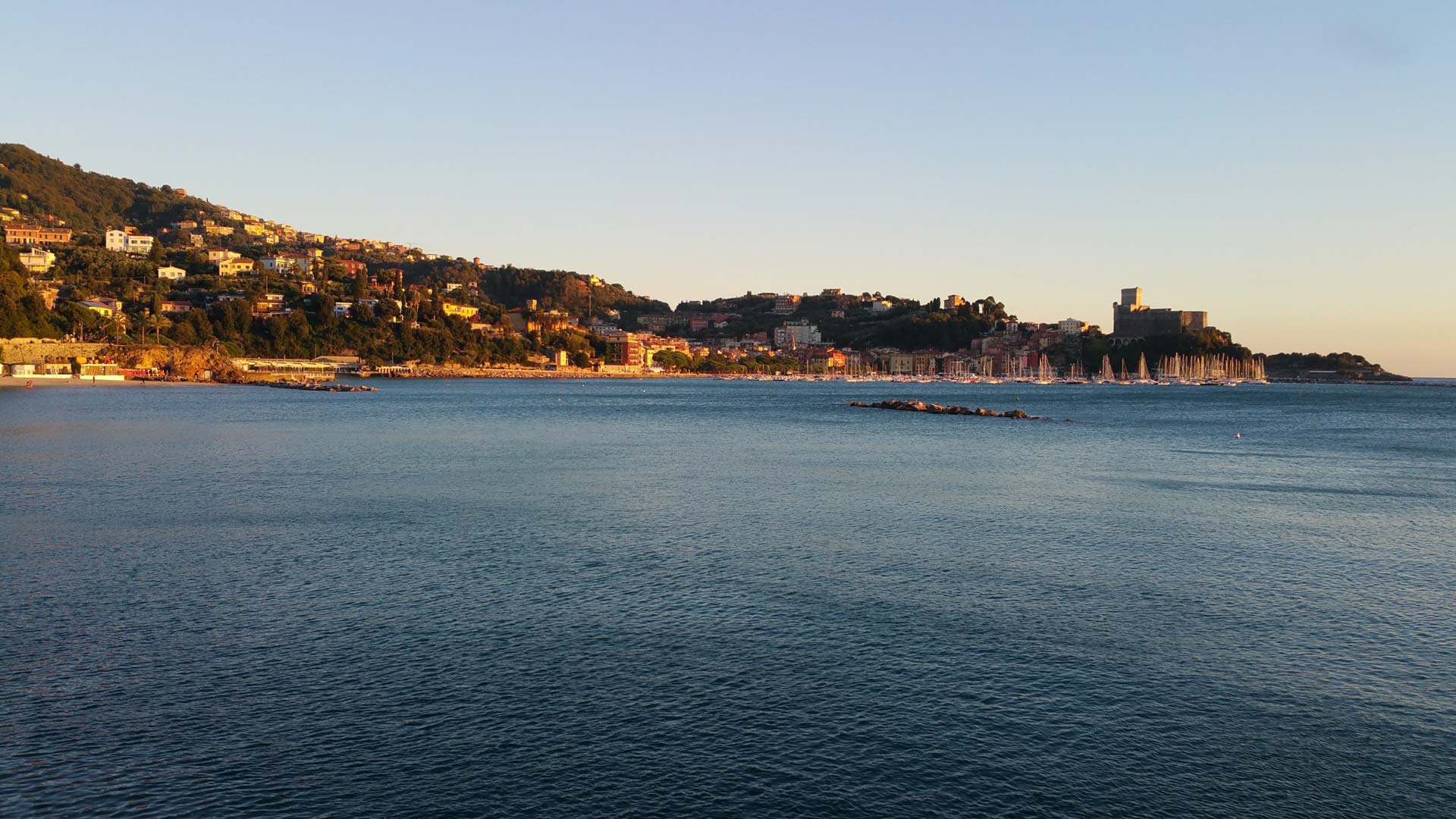 This Gulf was thus named by the playwright Sem Benelli. The climate here allows a pleasant stay all year round. A calendar full of cultural events, shows, festivals, sports activities and gastronomic appointments animates this beautiful Ligurian village mainly in the summer. The hamlet of Lerici is dominated by the imposing Genoese Castle (XIII-XVI century) that hosts the Geopaleontological Museum brought to life by the discovery, in the area, of footprints dating back to 220 million years ago. The Museum offers the visitor the chance to bring back to life, on a virtual level, the prehistoric world. Inside the castle there is also the Gothic chapel dedicated to Saint Anastasia (1250). The “Castle to Castle” sea promenade links the marina at the foot of the Genoese Castle to the “Venere Azzurra” beach and the “San Terenzo” ones with their Castle; an enchanting path over the hills leads to Fiascherino instead. San Rocco’s Oratory, an ex convent of cloistered nuns, is a religious building located in “Largo Guglielmo Marconi” in the historic centre of Lerici. It contains five altars with various paintings, eighteenth-century frescoes and San Rocco’s marble statue. Saint Francesco’s church, rebuilt in 1632, preserves a remarkable artistic heritage, including two canvases by the artist “Fiasella”. Doria Palace lies between the castle and the old harbour, in the actual “Garibaldi Square”. The Doria Museum, besides its own artistic and historic heritage, displays archive material too, hosting performances and cultural meetings.
San Terenzo is an old and picturesque hamlet located between Falconara and Lerici, mainly famous for having hosted Mary and Percy Shelley in its white “Villa Magni” overlooking the sea. The wide sandy beach attracts tourists from all over the world, so does its castle, built over a hillock dominating the sea in medieval times, right underneath “Falconara. Under this castle there is a little beach with crystal-clear waters that the locals used to call “The Turks Hideout”, a true must. During the summer this village grows lively inside the park of “Casa Shelley”, home to cultural initiatives and events, and in its characteristic restaurants in the inner alleys or “carugi”. After crossing San Terenzo, whilst heading towards the “Venere Azzurra” site, you cannot help but noticing the magnificent “Villa Marigola” with its beautiful “Italian style garden”, where many illustrious writers stayed: to this date, the villa hosts conferences and cultural activities all year round. In the historic centre of Saint Terenzo the suggestive parish church (around 1600) dominates: it contains an oil-painting on wood dating back to the fifteenth century depicting the “Madonna of the Arena”, thus called because the story goes that it was found on the beach after a violent storm. Inside this church there are a big late sixteenth century painting by Paolo Gerolamo Piola and a bas-relief by Domenico Gar, called the “franciosino”.

The village of Tellaro lies in the easternmost part of the Gulf of the Poets, on the same road leading from Lerici to Montemarcello. Once also walled up, it preserves the church of Saint Giorgio overlooking the sea; this very church is the main protagonist of a famous tale. The story goes that one night Tellaro’s inhabitants were awakened by the bells’ sound played by an octopus that by doing so saved them from a Saracen raid. Besides, in Tellaro there are the “In Seàa Oratory”, the Church of Saint George built right on the rocky spur emerging from the sea and the Church of Saint Mary “Stella Maris” located just at the gates of this hamlet. Beyond the little square in the pretty historic-pedestrian centre, rich in bars and restaurants, you can descend towards the rocks and the sea through narrow alleys or “carugi”.
Fiascherino, between Tellaro and Lerici, is renowned for its well equipped private beach, hidden by rough picturesque cliffs full of atolls and cliffs. In particular you will come across two different types of beach: one is big, sandy and sheltered from the wind whereas the other is small and mainly known because of the frequent visits of the poet D.H. Lawrence who lived with his wife Frieda by “Villa Rosa”, in this beautiful village.